When I calculated my impact last year, I knew something had to change. I was doing quite well, because I live vegan and buy most of my stuff secondhand, but flying seemed to be a major issue. I could fly and still have the amount of eco-points to live a sustainable life. But, I want to live as sustainable as I can, so that means the less negative impact, the better. So, I decided to quit flying by plane! But, I am going on a holiday this year! By train. Today I’ll tell you how.

Ditching the plane
Ditching the plane was a fairly easy choice, I don’t want to cause so many emissions anymore, just because I want to sit with my lazy ass on a beach and a bar in a place where it is hot. I never really had a good reason to step in a plane, only for a holiday. I mean, holidays by plane are a plus, not something essential I need. So, no, I am not doing it anymore. And I told everyone. Getting the word out was essential to me, because even though I said the decision was fairly easy, the execution is not. Is this going to last forever? I don’t know. But, for now, I’m just taking it one trip at a time.

Our holiday
The trip that is coming up is one to Albufeira, Portugal. Let’s be honest, that’s not the end of the world, it’s quite nearby. So, the decision to go by train was easy this time. It is doable and does not take weeks! We are going there 11 days with our group of friends. With the past few holidays with them I’ve felt obligated to go by plane, simply because the group wanted it. But now I’ve realized that I can decide myself. So, they are going by plane and I am going by train this year. I am so exited for the adventure!

Traveling by train to Albufeira
If you’re new to this whole world of trains, which I am, it can seem overwhelming. How in earth am I going to find all the tickets and transits and websites and everything? Well, there is one website that gives you all this. It’s www.seat61.com! This man is brilliant. He basically has a website where you can see all the routes by train over the whole world! I could even go to Australia by train! He has is all very neatly explained and it gives so much clarity. I came to find out that there are multiple routes to Albufeira. In this map below you can see these routes. 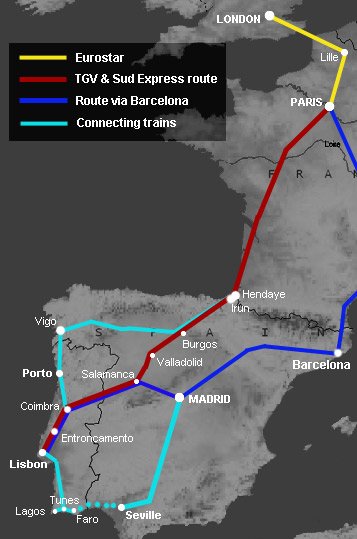 This is the route I will take:

Step 1: From Enschede to Amsterdam by car or train (price varies since I don’t know where I’ll be or how I will travel)

So, that’s it! Leaving Amsterdam I’ll have to transit 3 times, which is not that bad. I decided to go via Hendaye and not Barcelona because in Barcelona I’ll have to stay in a hotel for a night which I don’t want. Taking this route, I can sleep while traveling, this is great! It will cost me 134 euro’s for a single tickey if I book on time and do things right, but we will see about that in the end. I’ve left out the way back home, since I’ll take the same routes and trains. It is cheaper than going by plane, I know, since my friends are doing that. That’s very good to me, saving the environment and saving money!

I am exited for this adventure!

0 thoughts on “Sustainable travel: Going to Albufeira by train!”

Hi! My name is Romee Hoeksma and I am on a journey to an eco-positive life. An eco-positive lifestyle is a lifestyle in which I have a more positive than negative impact on the beautiful planet earth. On this blog you can follow my journey to a life with only positive impact. At this blog you can find all sorts of things, from tips to recipes to personal expereinces, but most of all fun (I hope!). I write about how I want to change the world, but don’t look at it as if I’m judging you. If anything, I like responses from my dear readers the most, so don’t hesitate to contact me or respond to any of my posts!

Want to get an update every time I post something?

Here’s what I posted most recently